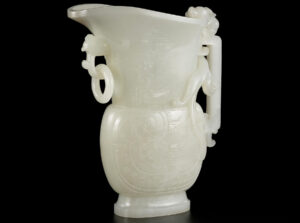 An upcoming themed auction in Hong Kong is showcasing more than 40 pieces of Chinese artistic artefacts connected to drinking and wine culture over the past 3,000 years. Bonham’s auction is called “Ganbei: A Toast to the Chinese Wine Culture,” and one of the items is gaining more attention than others. A centuries-old Chinese artistic wine vessel that is set to be worth millions.

It is said to be “imitating Shang and Zhou dynasty bronze wine vessels, gong, made only for the nobility to use.” The piece was previously at the Hartman Rare Art auction house in New York.

“In imitation of an archaistic bronze gong, finely carved with stylized phoenix panels on both sides, standing on a slightly splayed foot, carved below the lipped rim with a phoenix head suspending a loose ring, the faceted handle well carved with a playful chi dragon with its head and a paw resting on the rim, its sinuous body coiled through the handle, the translucent stone of an attractive milky-white tone with an area of amber inclusion below the lipped rim, box.”

There are 47 lots available as part of this collection. One of the pieces is an almost 3,000-year-old bronze vessel from the Spring and Autumn period (770-476 BC). This piece is also set to sell for millions. The entire collection could be worth as much as HKD 23 million (approximately USD 3 million).

The amount of history and archaeology presented in this collection might have some saying: “It belongs in a museum!”