Bruno Mars Trades Mic for Mixology to Promote His Rum 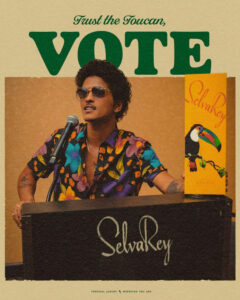 After a sold-out concert at the MGM Music Hall in Fenway, Bruno Mars brought his tropical, meets 70’s swag to the Envoy Hotel’s rooftop bar, Lookout. Shots of the award-winning musician’s SelvaRey rum were flowing.

A moment fans will “Treasure” forever!!! Check out @BrunoMars serving shots to fans at the Envoy Hotel’s Lookout Rooftop and Bar while in Boston this past weekend 🍸🥂🍾 #DailyVoice #BrunoMars https://t.co/9S9gNVLq3b pic.twitter.com/VyXtpI9JJE

SelvaRey rum is distilled in Pesé, Panama, by Master Blender Francisco ‘Don Pancho’ Fernandez. The rum is notably co-owned by Bruno Mars. The line of rums includes white, chocolate, coconut and Owner’s Reserve. From the looks of it, the people of Lookout Bar were getting a taste of the SelvaRey Coconut rum.

Bruno Mars at the Envoy Hotel in Boston 🥰 pic.twitter.com/6o3G5amQqb

This is not the first time Mars has been seen behind the bar. Back in July, the artist surprised patrons at Rum Runners in Cleveland, Ohio, declaring himself the best bartender in Ohio.

Mars has been part of several promotions and private events across the country. Earlier this Sept., the celebrity was at the Fairmont Chicago Hotel, which is now collaborating with SelvaRey, and three custom cocktails were served as part of this event.

Charlotte, North Carolina was also graced with Mars’s presence at another private event in July. Fans on TikTok were hoping their city might be next, just to catch a glimpse of him.

As Mars heads off to Australia, the people of Sydney might be getting themselves another bartender.

Keep an eye out because it looks like Bruno Mars could appear at your local bar, slinging his Dancing Juice cocktails for the masses.