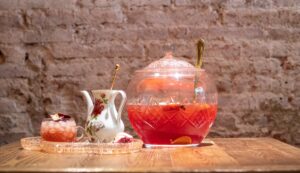 Punch is widely considered to be one of the earliest forms of cocktails. The first iterations of this style of drink came about in the mid-1600s. Originally, rum was not included in punch recipes, but as rum gained popularity it quickly became the choice spirit for this party beverage.  Now we celebrate the use of rum in this beverage with National Rum Punch Day.

The origin of the name for punch is highly debated, some believe that the name is derived from the Hindi word for five, in regards to the number of ingredients in the drink. This version of the drink’s name comes from English officers during the colonization of India. Another possible source for the cocktail’s name comes from the word for a short broad barrel called a Puncheon. The explanation for the use of the barrel for the name is that barrels were often halved to make vessels to serve the drink in, thus shortening the term for the vessel to punch in reference to the beverage.

The most basic recipes for punch call for just four or five ingredients, usually including something sour (lime/lemon juice), sugar, a spirit, water and spices. With Just a few ingredients and a large bowl, you can have a fantastic rum punch for your next party.

Here are some new and some revived classic recipes for rum punch: 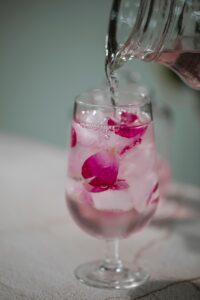 The first known punch recipe ever recorded comes from German adventurer, Johan Albert de Mandelslo in 1638. He described the punch made by factory workers in India as “a kind of drink consisting of aqua vitae, rose-water, juice of citrons and sugar.” This combination of ingredients would work fantastically with an unaged rum as the replacement for the aqua vitae. For our interpretation of the recipe, lemon is the preferred citrus along with simple syrup and classic rosewater.

Dissolve sugar in warm water, then add the strained lemon juice, rosewater, and rum into a large bowl or pitcher. Serve in ice-filled glasses and garnish with edible rose petals and lemon wheels. 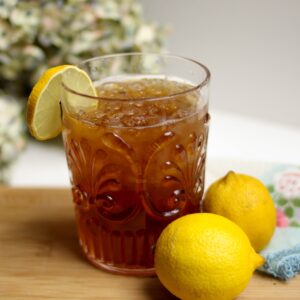 This punch is believed to be first concocted in 1732 at Philadelphia’s fishing club, in Schuylkill, which is known as the Fish House. Historians state that Philadelphia’s Schuylkill Fishing Club began every meeting with a bowl of this potent punch. This beverage packs quite a punch in more than just its title. It is a very boozy drink made with a mixture of tea, peach brandy, rum and cognac with the addition of lemon and sugar.

Make 4 cups of black tea and dissolve the sugar while still warm. Add the lemon juice, rum, cognac and peach brandy to the tea in a large bowl or pitcher. Throw lemon wheels into the serving vessel for garnish. Serve in ice-filled glasses. 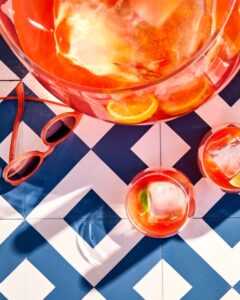 Fruity rum punches are much more popular today than the boozier, less sweet versions of the past. Rum punch is drunk around the holidays in the Caribbean, but it really can be enjoyed anytime. This punch is perfect for any party because of its crowd-pleasing tropical flavors that go perfectly with rum.

Combine the juices, rum and grenadine in a large bowl or drink dispenser. Pour into ice-filled glasses and garnish with an orange slice and a maraschino cherry. 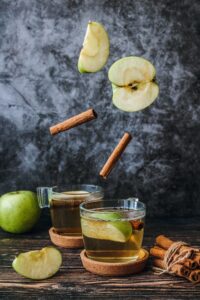 If the Caribbean rum punch recipe is too tropical and summery for your party vibes, then give this punch a try around the holiday season. National Rum Punch Day is just before the beginning of the fall season, so this version of the party drink is perfect for the change in weather. The autumn rum punch uses the flavors of fall with apples, dark rum and ginger.