Is the Collapse of Cuban Rum on the Horizon?

Embargoes and Crop Failures: Is the Collapse of Cuban Rum on the Horizon? 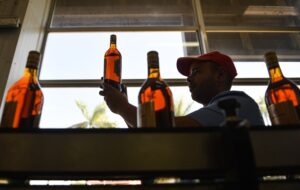 Cuba is struggling to produce enough sugar for export let alone for its own consumption. Cuba relies on raw sugar as one of its main exports but is now being forced to abandon its trade plans. The decline in sugar production will cost the communist country hundreds of millions of dollars in exports. It could also signify the collapse of Cuban rum in the future.

According to reports, Cuba plans to produce 455,000 tonnes of raw sugar this harvest cycle. However, this is 14,000 tonnes less than the previous cycle which hit a hundred-year low. Therefore, it is projected to lose out on $150 million in exports.

“This is the first plan since the 1959 Revolution that does not include significant exports, though they may export some if the price is right then imported later [for local consumption],” according to an anonymous Reuter source.

Sugar is essential for rum production and both products, rum and raw sugar, have been essential for Cuba’s foreign exchange. In the past, Cuba has exported and then imported raw sugar after disastrous harvests, sometimes importing from Brazil. The country has an export deal with China but this agreement has been suspended due to low sugar yields.

Reuters indicates that state-run sugar monopoly AZCUBA has said this cycle’s harvest of sugar will mostly go to domestic consumption and derivatives such as rum.

One of the signs of the declining sugar industry in Cuba has been the closure of its mills. Reports show only 23 out of the 56 total mills will be grinding sugar this year. A number of factors are contributing to this decline including a lack of fuel, supplies, parts and staff.

Over the last five years, Cuban agriculture and industry have been on the decline. The continued US sanctions along with the pandemic have been exacerbating the country’s ailing economy. If this trend continues there may not be enough sugar to make Cuban rum in the coming years and one of the most famous rum-producing countries could be out of the game. This would be a great loss to the historically important rum region.