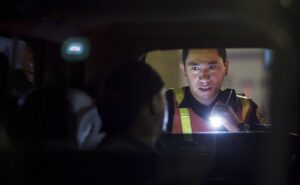 A drunk driver was arrested on Sept. 21 near Cadillac, Michigan. Michigan State Police were dispatched after reports of a man witnessed on the side of the road trying to flag down help.

The incident occurred around 8:40 p.m. in the area of South 33 Road near East 46 Road in Wexford County.

The man was identified as 43-year-old Tony Lee Bennett whose vehicle had apparently run out of gas. When the officers located Bennett, he was being helped by two other individuals who were pouring gas into Bennet’s vehicle’s fuel tank.

After being prompted, Bennett went to retrieve his ID from inside his vehicle but instead handed the police a half-empty bottle of vodka.

Bennett displayed signs of intoxication and sobriety tests were conducted. He was then arrested for suspicion of operating a vehicle while under the influence.

According to WWJ Newsradio 950, the Michigan State Police said “A chemical test later determined he was three times over the legal limit.” In addition, “a .22 caliber handgun was recovered from the back seat.”

This is only weeks after a Michigan woman, Kelly Marie Fullerton, was arrested within the same area for Operating a Vehicle While Intoxicated and a half-empty bottle of rum was found in her vehicle.