Behind The Bar: Educated Barfly Explains His YouTube Success Sharing Cocktails and Rum With World Online 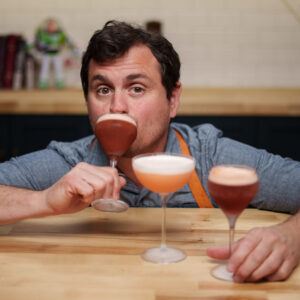 (Photo: Courtesy of The Educated Barfly)

We sat down with Leandro DiMonriva, the host of the extremely popular YouTube channel and brand, The Educated Barfly. In this interview, we explored how he garnered his success, what’s next on the horizon for the brand and of course, rum.

Where it all began

DiMonriva’s journey started like many others who have moved to L.A. over the years. He wanted to work in the film industry. However, the path for DiMonriva wasn’t always so clear. From a production assistant and actor to bartender and now YouTube cocktail-making sensation; he has done it all in a true Hollywood experience.

He credits his success to the people he met and worked with along the way who helped to culminate the brand and the YouTube channel into what it is today. DiMonriva started out as a production assistant and was working his way up. It was around this time that he met Marius Hagen, who would later become part of the Educated Barfly team. Also during this time, DiMonriva was writing and working with his wife, who was a director on a short film that won several awards.

DiMonriva decided to move on to acting after witnessing others in the field find success. So, he hired an agent and began auditioning for roles. However, since production can require a lot of hours, it is difficult to have the flexibility required to be an actor, as well. Thus, DiMonriva entered the bar world.

“So I went into bartending, first working as a barback and then bartending because it gave me a very flexible schedule, and I was able to work at night.” He said, “So, I had all day to be able to make auditions. It was like, the best thing. Eventually, I worked in that nightclub for four years.”

However, DiMonriva just couldn’t find his footing in the acting world, as the majority of aspiring actors experience. He explained: “I got sick of the hustle of acting, and it really wasn’t going anywhere for me.”

This is when DiMonriva landed in Cole’s French Dip and learned the skills he now shares with the world.

Cole’s French Dip and The Varnish

Established in 1908, Cole’s French Dip is the oldest operating public house in L.A., and in the back was a speakeasy-style bar called The Varnish. As DiMonriva conveyed: “It was ground zero for a lot of the most important bartenders in the city.”

DiMonriva was able to pair his love of history with his cocktail knowledge by talking with patrons of the bar and unknowingly honing his skill for what would later become his YouTube career.

After working at Cole’s for about eight years, DiMonriva had come to a point in his life where he wasn’t sure what his next steps should be.

“At the time we started Educated Barfly, I was at a crossroads because I was aging out of bartending,” he said.

The life of a longtime, experienced bartender was catching up to him. “My rotator cuffs were burning from shaking, I was getting tennis elbow, and I hyper-extended my knee. It just wasn’t what I really wanted to do.

“But when you are a bartender, the next step up out of that profession is either you own a bar and get put into business or you become a brand ambassador. Both those things were just not things that I saw myself doing.”

The Beginnings of The Educated Barfly

YouTube wasn’t DiMonriva’s first choice. Coming from the film industry, he wanted to be behind the camera and make a show about bartenders.

“I had been inspired by Chef’s Table, and I was seeing like all of this culinary work going on in the bartending industry,” DiMonriva said. “And I was like, we should make the Chef’s Table for bartenders.”

After this disappointment, DiMonriva credits Hagen with the idea to create a YouTube channel, but in a way, The Educated Barfly still was not born.

“I didn’t actually envision myself as the host of the show,” DiMonriva explained. “What I wanted to do was just get all of the bartending talents in town to come on the show to present their drinks.”

The problem was bartenders are fickle people, and they couldn’t reliably create a show using other people.

“I reluctantly agreed to make the series called ‘Master the Classics.,” DiMonriva said. “We would have the focus be on the history, and we would have it be focused on the technique.

DiMonriva described the idea behind the series as “I’m there to bridge the gap between the amateur and the professional.”

DiMonriva admitted they were probably a bit naive.

“We were six months in, and we were getting no views,” he said. “Marius came to me and was like, ‘How long are we gonna do this before we quit?’”

Then, inspired by an article about a popular YouTuber, they decided the best way forward was to put out an episode everyday. DiMonriva said this shift in strategy “spiked up our views a little bit, but it didn’t do very well.”

The game-changer that sparked interest and launched a highly successful YouTube career? A  video that DiMonriva didn’t even want to publish,

“We shot this video on a negroni cocktail, and it was a terrible video, and I told Marius I don’t want to release this video,” he said

“It’s terrible. I hate it. It’s not gonna do us any favors,” DiMonriva said he told Hagen at the time.

However, a situation arose where they didn’t have anything new to post, and — trying to stick to their daily posting schedule — they “just didn’t have a choice,” DiMonriva said.

It wound up being for the best.

“That is the video that, like, exploded, and when that video exploded, all of a sudden, we have like a thousand, two thousand,” he said. “It was just that video that brought us into the actual legitimate channel.”

Rum and Cocktails: A Love Story

Because we are Rum Raiders, we had to discuss rum and cocktails and how they have become so important to the spirits world.

We got into why sharing cocktails with the world is important.

“I just think there needs to be a shift in the way that people think about drinking,” DiMonriva explained. “First of all, drinking should be done in a more mindful way, right? I think people are going to drink cocktails anyway, and if you’re gonna drink cocktails you might as well try and drink the very best version of that.”

Obviously, making a cocktail is harder than opening up a can, but DiMonriva implores drinkers to go the extra mile for quality’s sake.

“What frustrates me the most is that when it comes to food people will bend over backwards, buy thousands of dollars worth of equipment and literally make something that’s going to take you several hours, but when it comes to drinks, everyone wants it to be fast,” DiMonriva said. “Classic cocktails are really limited in their ingredients, and if you master the techniques of making them, they can be made very fast.”

Answering what your favorite rum cocktail can be a difficult question for many because of the sheer variety and nuance of each cocktail. DiMonriva encountered a similar dilemma but provided a few top choices.

“The thing is, it’s really hard to have just one favorite from the console because rum is such a nuanced spirit,” he said. “I really do love a really well-made Mai Tai. There’s another drink by this guy named Jeff Berry who runs a bar called Latitude 29, in New Orleans, called an Ancient Mariner, that he made in the mid-2000s, which is probably one of the best Tiki-style drinks.”

DiMonriva also commented that he loves a well-made mojito or daiquiri.

The daiquiri is many bartenders’ favorite rum cocktail to experiment on. The flavor is easily changed by the quality of the lime and the amount of simple syrup added, but the choice of rum also plays an integral part in the distinctiveness of each bar’s daiquiri.

The Barfly has a few choices of rum that make for a great daiquiri.

“Honestly, for me, a daiquiri should be like alcoholic lime candy,” he said. “I really like to use a very clean, sharp rum like Flor de Caña 4 year, Bacardí Superior or even a pineapple daiquiri using Plantation ‘Stiggins’ Fancy’ Pineapple. Also, Jamaican rum in a daiquiri to get all that nice Jamaican funk.” 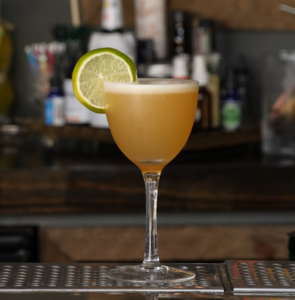 The Future of The Educated Barfly

There is more to come from the Educated Barfly as they plan for the future. DiMonriva explained: “We really want to build Educated Barfly into a more legitimate resource. We are also building a new channel called The Spirited Adventurers, where we’re doing a lot of travel content, looking at distilleries and the people behind certain bar programs.

“I’m very interested in deeper understandings of the spirits that make up the cocktails of the spirits industry, and so we’re really passionate about building that, but really we just want to build it into a bigger sort of resource.”

The new channel, The Spirited Adventurers will focus on the source of spirit making, exploring distilleries and spirits in-depth. Keep up to date with The Educated Barfly’s new projects by checking out their channel and, as always, make sure to like and subscribe.

The Best Coffee-Infused Rums and Liqueurs for the Coffee Connoisseur

The Best Fat Washes for Rum