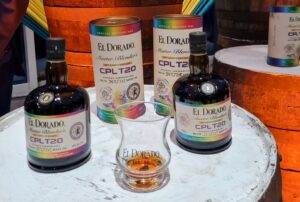 The El Dorado Special Release Rum debuted on Monday to celebrate their 10th anniversary as the official spirit of the Caribbean Premier League (CPL). The rum was attuned by the master blender to represent the six cricketing nations that make up the CPL franchise: Saint Lucia, Guyana, Trinidad and Tobago, St. Kitts, Barbados and Jamaica.

The rum doesn’t just have a unique name that sounds like something from Star Wars, it has a whole new look. The bold colors capture the shared beauty of the Caribbean Nations.

James Stewart, the commercial director of the Caribbean Premier League commended the EL Dorado brand for its commitment to promoting high-quality rum. Stewart added “We’re both brands that seek to bring people together and spread joy. We are about celebrating success and friendship, and that has been an enduring part of the reason this partnership has been so successful.”

The chairman of the DDL, Komal Samaroo shared similar sentiments. Samaroo expressed, “the synergies that we have built over the past ten years have been beneficial for the game as well as the brand. Like El Dorado, cricket in Guyana also has a deep connection with the sugar industry. We are pleased that we have been able to take the byproduct and create a brand that is now sold globally. This collaboration is a partnership born in heaven. I am delighted that we have had ten successful years and have renewed our partnership for another five years.”

The El Dorado Master Blender’s 10th Anniversary CPL T20 Rum is now available for sale at local retail outlets countrywide and all Duty-Free Shops in Guyana. It is not stated when or if the bottles will be available for purchase elsewhere.