Lift Vodka Caught in the Middle of Colorado Election Turmoil 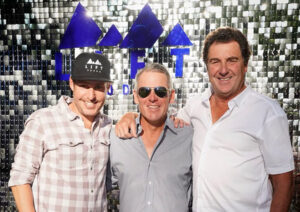 The incumbent for Pitkin County Sheriff, Joe DiSalvo, is currently being investigated by the Colorado Department of Revenues for his association with Lift Vodka. It is uncertain why this investigation began but may have to do with a conflict of interest for DiSalvo as a political figure.

The Lift Vodka brand was founded in 2020 by Lance Armstrong, Zack Neiditz and DiSalvo. It is marketed as a small-batch corn-based vodka using 100% Aspen-tap water.

The spokeswoman for the state’s revenue department Suzanne Karrer stated “This is still an active investigation, so, by policy, we cannot comment.”

According to Avery Nelson, Lift Vodka’s general counsel, requests by the state are not unusual, but it normally occurs after a complaint has been filed about the liquor license holder.

Challenger Michael Buglione has argued that DiSalvo’s involvement with Lift Vodka means he is not committed to the Sheriff’s Office. However, DiSalvo maintains his only involvement is being gifted 5% of Lift Vodka, in a handshake deal. This would mean if the brand sells he would receive part of the profits.“I collect no money until or if the business ever sells,” DiSalvo commented. Although, the wholesale license for Lift Vodka does not name DiSalvo as a member of the company.

Although, Colorado law indicates individuals only need a license if they own at least 10% of the company.

There may also be concerns over the gifting of the 5% of the vodka brand. According to the Code of Ethics in the Colorado Constitution, public officials and employees are not allowed to accept gifts over the value of $59. This rule does not apply to employees when the gift is from a personal friend or relative on a special occasion. Disalvo claims he is friends with Armstrong so this rule does not apply to him in this case.

DiSalvo’s involvement has been a talking point earlier this year as well.

Back in Jul., Buglione supporter and former Aspen mayor and ex-county commissioner Mick Ireland claimed “[DiSalvo] thinks it’s OK to solicit sales of his Lift Vodka to local bars and restaurants. Joey is quoted in the Aspen Times as personally “schlepping” cases of the vodka to local establishments.”

It is unclear how DiSalvo’s association with the vodka brand will affect the upcoming Nov. election for Pitkin County Sheriff.