Runners could have been fueling up on more than electrolytes at the recent marathon in Mexico City. On Aug. 28, before 7 a.m., a man who appeared to be under the influence filmed himself pouring Matusalem Platino rum into sports drink-filled cups at one of the hydration stations set up for the runners prior to the start of the race.  The offender’s video of him spiking marathon runners’ drinks was posted on Twitter alerting authorities of the incident.

The hydration station was set up around the halfway mark, 12 miles in, and the consumption of alcohol could have severely dehydrated runners to lethal degrees. More than 19,000 runners participated in this marathon making this a potentially quite dangerous offense. 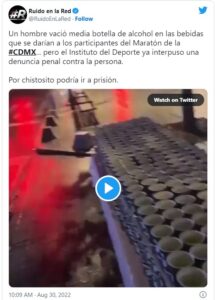 The man was supposedly leaving a nightclub when he came across the fueling station. In the video, the man can be heard saying: “I’m going to pour some f***ing Matusalem in, so they can show off. Tomorrow everyone will be at their best, tomorrow, look, everyone at their best, f***ing race it’s going to be the best in the world. Tomorrow everyone is going to run fast like target shooting.”

Matusalem has never advertised that its rum enhances the performance of athletes, so it is unclear where the culprit got the idea that the rum would help the runners. Fortunately, race workers noticed the cups had been tampered with and immediately replaced the tainted drinks. No participants consumed any of the spiked beverages. The runners were not made aware of the incident until after the marathon had been completed; therefore, it did not affect their ability to perform.

The man has been identified and is expected to be prosecuted for attempted poisoning. His identity has not been made public. Mexico City Institute of Sport Director Javier Hidalgo Ponce placed blame for the incident on Mayor Miguel Hidalgo’s office for allowing the late closure time of nightclubs in the area.