NTSB Campaign to Add Breathalyzers to All New Vehicles

With Roadway Deaths at ‘Crisis Levels,’ Transportation Officials Campaign to Add Breathalyzers to All New Vehicles 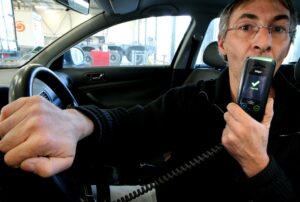 A man holds an electronic ethylotest device that prevents the start of the vehicle in case of positive control.
(Photo: FRANCOIS NASCIMBENI/AFP via Getty Images)

The National Transportation Safety Board (NTSB) is campaigning for alcohol breathalyzers in all new cars as a solution to roadway deaths in the U.S.

This comes after the National Highway Traffic Safety Administration (NHTSA) said this week that roadway deaths in the U.S. are at crisis levels with about 43,000 deaths last year. The greatest number in 16 years. One of the most significant contributors is alcohol-related traffic incidents

The NTSB has no regulatory authority and therefore can only pressure other agencies to enact regulatory measures.

According to NPR, NTSB Chairman Jennifer Homendy said, “We need NHTSA to act. We see the numbers. We need to make sure that we’re doing all we can to save lives.”

The NTSB has been pushing for alcohol detection measures since 2012. The action could be effective as quickly as three years from now if adopted. Homendy further commented, “The faster the technology is implemented the more lives that will be saved.”

One of the technologies could include blood alcohol monitoring systems in every car. The NTSB is also recommending systems to monitor driver behavior. However, current technology to test alcohol levels may not be effective and Homendy said, “We also know that it’s going to take time for NHTSA to evaluate what technologies are available and how to develop a standard.”

Obviously, any action taken that prevents individuals from driving their cars cannot be defective to avoid stranding drivers.

The bi-partisan RIDE Act of 2019 was meant to promote the research and development of alcohol detection such as technology in new motor vehicles. According to a previous NPR article, Senator Top Udall, who introduced the bill, said, “When you meet with families, and when you see the devastation that this causes, it’s something that really moves you.”

The RIDE Act was referred to the Committee on Commerce, Science and Transportation (CCST) on Oct. 16, 2019, but no further action appears to have been taken.

This new push for action may be stalled before ever taking off.