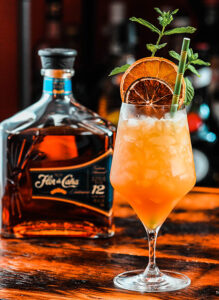 Flor de Caña’s Sustainable Cocktail Challenge really heated up with the final for the North American Regionals coming to a head. The Roosevelt Room in downtown Austin’s historic Warehouse District was full of excitement and Flor de Caña rum was flowing yesterday as ten challengers took to the bar for an all-out mixology mastery competition.

The competition is part of the Tales of the Cocktail Foundation Sustainable Cocktail Challenge which is sponsored by Flor de Caña. The Austin leg of the competition will decide one of the North American Regional Finalists who will then be eligible to compete in the Global Final in Nicaragua in 2023 for the title of “Flor de Caña World’s Most Sustainable Bartender “and a grand prize of $10,000.

Flor de Caña is Carbon Neutral and promotes sustainability in the spirits industry. They also plant trees to offset carbon emissions and seek out ways of being environmentally friendly.

Other locations for the North American Region competition occurred in Miami, Los Angeles and Boston. The four winners of the local U.S. finals each receive a $1,200 prize, a super-premium bartender kit and a personalized bottle of Flor de Caña 25 Year Rum. In total, the competition involved 42 countries from around the world. 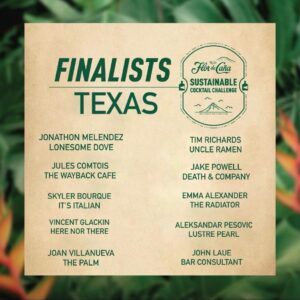 The Final Competitors Introduce Their Cocktails

There was an intense feeling of community and support as each bartender presented the stories behind their cocktails to the crowd and the judges. 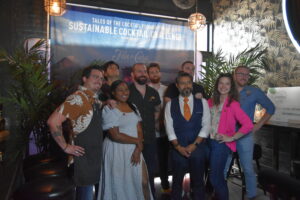 The ten individuals competing already beat out hundreds of other entries. The competition occurred in two rounds. The first round involved cocktails the bartenders had already conceptualized.

The theme was sustainability and the creativity employed to make these cocktails with this in mind was quite impressive. The main aspects of sustainability that were of focus included water and food waste along with alternative materials or reused glass for cocktails vessels.

Vincent Glackin commented, “I think the food and drink industry has always been at the forefront of sustainability and I think we need to kind of continue that.”

A highlight of round one was Emma Alexander’s booming personality and her emotional background story about growing up poor that inspired her “New Shoes” cocktail.

Round 2: The Mystery Bag

In round two, four competitors would go on to the mystery bag challenge. Each bartender would only have 10 minutes with the mystery ingredients to come up with their cocktails before having to make them for the judges, basically, Chopped for bartenders (which would make for a great show).

It was a close competition. The finalists who competed in round two were Vincent Glackin, Tim Richards, Emma Alexander and Jake Powell.

In the end, the big checks went to Glackin in third and Powell in second. In first place, and going to Nicaragua, was Tim Richards. Richards’s winning cocktail was called “When Doves Cry” and was inspired by a Paloma. Along with Flor de Caña 12 year the cocktail featured watercress mixed with cardamon and sage; muddled blueberries, raspberries and blackberries; and then topped with lemon and ginger kombucha. It seemed Richards tried to incorporate as many ingredients as possible which may have contributed to his overall win. 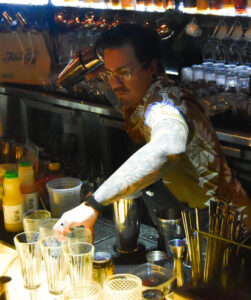 Good luck to all the competitors in Nicaragua!